Roger first came to Australia in the 1970s from England. Prior to moving to Australia, Roger worked as a Professional Chef before he and a mate decided to go to Canada, then at the last minute decided on Australia instead.

When he arrived here in 1973, he worked as a Chef, and was actually working at the Southern Cross hotel when Frank Sinatra was a guest – fun fact!

After a while he discovered catering wasn’t really his passion, so tried something new and worked with various builders as a carpenter’s labourer.

He fell into the kitchen industry by accident around 1983. Roger was working for Greenway, Hirst, & Page Architects at the time, and was dating an interior designer who was working for Merchant Kitchens.

“She asked me if I would help her out with some drawings, as she was snowed under, the rest is history, and no, we didn’t get married. She decided to return to Ireland and leave me with it.” Roger worked with Merchant Kitchens and Customtone Kitchens as a Technical Consultants for many years which involved site measures, project supervision and technical detailing.

Over his extensive career Roger has worked as a Technical Consultant, Installation Manager, Site Supervisor, Designer, and Technical Detailer.

In the early 90s he was responsible for setting up Melbourne’s first Bunnings Store with Kitchen and Bathroom displays, then acted as Installation manager with that project for approximately two years. A complete house within the Bunnings store was built with displays for kitchens, bathrooms, laundry etc.

Roger has been with Rex and the team at LTKI for over 25 years. He loves his role as a Technical Detailer, particularly because he gets to the home prior to any work being started, and then enjoys seeing the transformation from old, tired, dated, or just not suitable, to something that exceeds the clients’ expectations.

When he’s not working you can find Roger pretty active, he does all the cooking at home (lucky Carol!), he loves surfing, snow skiing, bush walking, renovating, and both surprisingly and interestingly, guitar making!

Receive ideas, inspiration and tips for your dream home 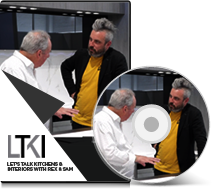